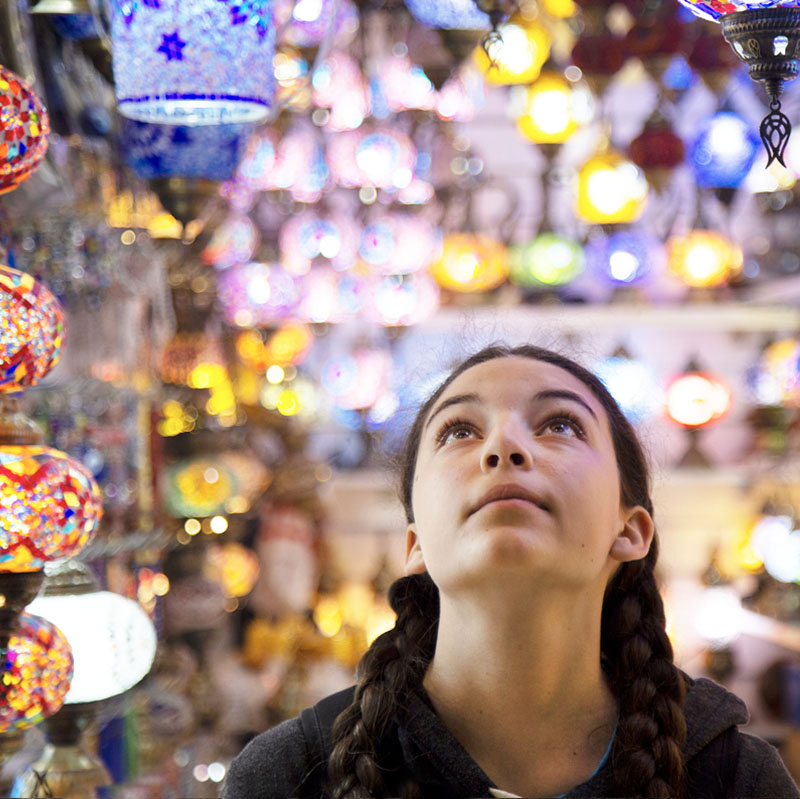 “I’m at peace when things are either fast or slow, in between is where I get the itch and wonder what’s next” – Avalon, Age 18

Avalon is the cerebral one of the family and can engage with anyone on practically any topic. She is a dog person and constantly at odds with her traitorous cat-person brother. Avalon has cultivated her two loves, robust discussion and reading, into a business. She holds regular Book Clubs with other kids who actively engage with her on topics from teen rom-coms to fantasy and human rights. Her mind goes far, wide and deep.

Being a full-time traveler has led her to truly believe the fact that you can be picky and grateful at the same time, particularly about food. “I have had the best pizza in the world…and it’s in New York City. I am grateful for Italy for inventing it, but now that I have had both, I can say with authority who is better.”

Having an arsenal of languages at her beck and call (English, Spanish, French and Japanese), Avalon also engages in language tutoring as a second business while juggling her book clubs and a rigorous academic schedule. She has the drive and determination of…well…a highly determined teen.

On all WorldTowning Voyages, Avalon takes a front and center role. She translates, runs the kids activities, engages in literary discussions and is always game for a good Marvel Cinematic Universe conspiracy theory argument.

We use cookies on our website to give you the most relevant experience by remembering your preferences and repeat visits. By clicking “Accept”, you consent to the use of ALL the cookies.
Cookie settingsACCEPT
Manage consent

This website uses cookies to improve your experience while you navigate through the website. Out of these, the cookies that are categorized as necessary are stored on your browser as they are essential for the working of basic functionalities of the website. We also use third-party cookies that help us analyze and understand how you use this website. These cookies will be stored in your browser only with your consent. You also have the option to opt-out of these cookies. But opting out of some of these cookies may affect your browsing experience.
Necessary Always Enabled
Necessary cookies are absolutely essential for the website to function properly. These cookies ensure basic functionalities and security features of the website, anonymously.
Functional
Functional cookies help to perform certain functionalities like sharing the content of the website on social media platforms, collect feedbacks, and other third-party features.
Performance
Performance cookies are used to understand and analyze the key performance indexes of the website which helps in delivering a better user experience for the visitors.
Analytics
Analytical cookies are used to understand how visitors interact with the website. These cookies help provide information on metrics the number of visitors, bounce rate, traffic source, etc.
Advertisement
Advertisement cookies are used to provide visitors with relevant ads and marketing campaigns. These cookies track visitors across websites and collect information to provide customized ads.
Others
Other uncategorized cookies are those that are being analyzed and have not been classified into a category as yet.
SAVE & ACCEPT